It was coming in way too fast.


The bottle-nosed ship sped toward the surface, front end engulfed in a huge ball of flame that covered the cockpit windows completely. Large chunks of ice caused by travel in deep space clung stubbornly to the tail. The spacecraft's speed never slowed, course never changed. When it crashed, the ground shook for miles.


The spacecraft slammed into the rocky earth in a brilliant explosion, raining shrapnel over the tough terrain. It flipped over, rolling violently, then broke apart as it’s progress was slowed by a field of large boulders.


Thick black smoke billowed up in waves as a moaning shadow stumbled from what remained of the cockpit. Cloaked, he moved as if in a daze, eyes unfocused on the rocky towers or their four crescent icons. Blood dripped from cuts, scratches, and soot covered him from head to boot, leaving ashy prints as he walked.


The pilot's haze slowly cleared and he began making his way through the wreckage to the granite cliffs at the base of the rock yard that had destroyed his ship, mind now alert, terrified. He had to hurry! He had to get it all back before they came or it would be gone forever, erased like it had never been!


He narrowed in on a mostly concealed tunnel. What he needed was in there. He stumbled over the rocks to the cave with a spray canister as his only weapon. Frames and bits crunched under his feet, ghosts of those who'd come before to save it all, and he straightened his shoulders. It would be worth it if he served his purpose.


It wasn't hard to find the spot. The piles of bones surrounding the bare dirt said the hardest part was yet to come and he pushed forward, mind insistent. He would do what he had come for no matter how bad things got.


The unforgiving ground didn't want to give up its treasure and the digging went slow. His tools had been lost in the crash and his hands soon bled as he scooped up gritty palmfuls of rock, dirt, and bone from the circle. At least he had the tiny light from his belt to keep him company, the spray canister there as well...


Had he heard something? His eyes widened as another scratch echoed off the dark, dank cave around him. They were coming! Panic flared and he began to dig frantically, dirt flying out of the widening hole.


The sounds grew steadily louder, the clicks and clacks terrifying him, and the man couldn't stop himself from moaning in fear, but he didn't stop working. When he hit something metal, his speed increased.


He cleared it as fast as he could, the rectangular box glowing with nicely centered letters, waiting patiently to be used, but the man's time was up. The Crawlers were upon him and he lunged forward, spraying the canister of saltwater at the huge spiders.


His body felt the pause, felt the whole system shudder at the blast of hated salt. It gave him enough time to drop his weight onto the box, activating it as the spiders crawled him.


The pain of his leg vanishing was excruciating and then the feeling was gone, his limb replaced, and he was being jerked backward, flung down.


His hands paddled, putting the dirt over the button and he tried not to fight it as his motions were repeated in reverse.


His feet moved him out of the cave and he closed his lids as the ship’s pieces flew toward him.


t was like wrecking a second time, being flung about the ship that was rebuilding around him, and then he was in the air, moving toward deep space and he let himself breathe again.


Thank God for the UNDO button, he thought, glad he hadn’t been lost in a freeze-up while trying to recover the single sentence. The person using this computer hadn't meant to hit delete.

Here are two more books you may enjoy. If so, let me know! (So busy with re-editing the backlist titles, I haven't been able to do much personal reading.) 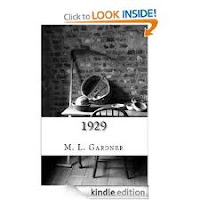 Anyone who enjoys historical fiction will love 1929. With rich, unique characters, 1929 is the first in an epic trilogy centered in the Great Depression. Following three couples through the economic collapse of 1929 and their struggles to adjust to a sudden and violent shift in lifestyle.

This mammoth novel will take readers to a dark time in American history. A time when so many lost so much and the bonds of love and friendship were the only things that held the fabric of life together. While some say history is now repeating itself with our current economic downturn, “1929, Jonathan’s Cross,” provides hours of entertainment and escape while giving readers a chance to connect and relate to the characters struggles of love, loss and finding hope.

*1929, Jonathan's Cross by M.L. Gardner is a one of a kind historical fiction that one doesn't see every day. --Mind Fog Reviews
*De Ja Vu! Stock market meltdown, fortunes evaporating, jobs lost, hope vanishing... - Kindle Reader
*Tastefully Romantic and Heartwarming! - Kindle Reader
*A Rare Treasure of Personal Triumph! - Kindle Reader
*Bring the whole box of tissues! - Kindle Reader
*A wonderful testimony of the human spirit with colorful and real-life characters, including an Irish heroine; all of whom will touch your heart in their own unique way and stay with you long after the last page. - Kindle Reader

A glimpse into 1929
Attempting suicide
Aryl yanked on the doorknob and burst through the door. He checked the living room, then ducked his head into the bedroom, but saw no sign of Jonathan. He threw open the bathroom door, and his face went white with the scene laid out before him. He leaned on the door handle to steady himself.
Jonathan didn’t look up, didn’t even flinch when the door slammed into the wall behind it.
“Put it down, Jon.” It was all he could think of to say, his voice shaking slightly. Jonathan didn’t acknowledge him, his eyes fixed on the straight razor pressed into his left wrist. “Jon, don’t do this . . . give me the razor,” Aryl said softly, taking a cautious step away from the threshold. Jonathan’s set expression was that of an already dead man. His only response was to press the blade slightly harder into his wrist, causing the skin to puff up on each side of the blade and a small drop of blood appeared. Aryl’s eyes darted frantically as he tried to think of anything he could say that would prevent Jonathan from pulling the blade sharply to the right.
“Go away, Aryl,” Jonathan whispered, his eyes still fixed. Aryl took another small step forward.
“I’m not leaving, Jon. Now give me the razor.”
Jonathan tensed and his fingers gripped the handle of the blade until his knuckles turned white. Aryl’s mind raced.
“Jon!” he yelled. “If you do this–” He paused briefly and tried to keep control of his voice. “If you do this, I swear to God Himself, I will take Ava and personally deliver her to Victor.” Jon’s dead eyes flickered.
“You promised you’d take care of her.”
“If it were an accident, Jon. But if you do it yourself? Forget it. I can’t deal with Ava grieving a husband who took his own life. Especially after watching you do it.” He hesitated as Jon looked down at the blade and began to breathe deeper and harder.
“You already promised,” he growled.
“I lied,” Aryl said flatly. Jonathan shook his head tightly in denial.
“Caleb will do it,” he whispered.
“Caleb’s got his baby to worry about now. And it’s just a matter of time before Claire comes to me with the same news. We have to take care of our own first, Jon.”
“You wouldn’t do that to me, Aryl,” he said pitifully.
“I could say the same thing to you.”

This next one is a very short blurb, but don't be fooled. I clicked on the Look Inside feature and found myself stuck and then downloading a copy. No idea when I'll get a chance to finish it, but I know I will. Can't get that image out of my mind!

Abandoned at her family's beach house, plagued by dark secrets, and without her psych meds, Jenny cannot know if the torment is all in her mind, or if she has become the plaything of a dark stranger.

Follow her trials to their dramatic conclusion in this disturbing psychological thriller.

Kill the Whales by L. Yirak